On April 16, 2013, The ADS Group’s Studio 120 and U-Branded productions went full speed ahead in the creation of 8 fitness trailers. These fitness trailers were filmed at Aria, an old historical theatre located in downtown Minneapolis. The space is generally used for corporate special events, weddings, conferences, social gatherings, and in this case fitness videos. 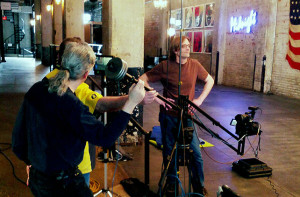 Aria couldn’t have been a more perfect location to shoot, it gave these fitness films another dimension due to its large floor plan, high ceilings, original brick walls, cement floors, and iron cast doors.

The cameras rolled as each individual fitness talent displayed unique routines targeting a different area of cardio and strength. Studio 120’s production crew was able to get clear shots of each fitness trainer’s fast pace movements and animated facial expressions with the use of high-tech camera equipment. Two camera units were used in the course of the shoot, camera Unit A which is a 3 broadcast camera that filmed simultaneously throughout the shoot and camera Unit B, an AF100 film styled camera that functions using prime lenses.

The full length fitness video production date is yet to be determined, but for now that is a wrap! The ADS Group would like to give a special thanks to Studio 120 and
U-Branded Productions on their positive efforts in the directing, filming, production, and editing of these trailers, in addition to the talented fitness coaches.