2013 MTV Movie Awards were held on Sunday, April 14th of last week. A lot of notable stars made their way down the red carpet at the award ceremony, but one up and coming duo from Seattle made sure their presence didn’t go unnoticed. Macklemore and Ryan Lewis performers of the popular song, “Thrift Shop” walked the red carpet. Macklemore may not have won the best dressed award, wearing a bright royal blue satin cape with gold tassels and a matching suit but he certainly stuck out in the crowd!

Later on in the evening the Seattle duo were introduced to the stage for some fist pumping action by Snoop Lion and Ke$ha to perform their new single “Can’t Hold Us.” Macklemore covered all areas of the stage with his animated dance moves and his ability to climb to upper levels of the stage ending in the crowd.

Macklemore & Ryan Lewis are clients of CopyCats Media a division of The ADS Group. Recently The ADS Group a full service CD/DVD Media Development and Distribution Company replicated and packaged their new hit album “The Heist.” 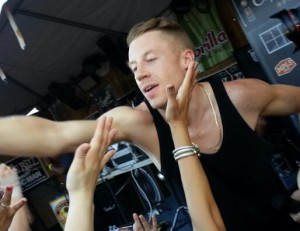